Chinese New Year is a huge festival among Chinese communities across the world. Each 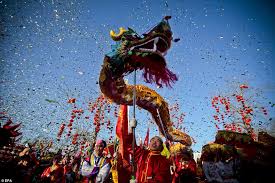 year in the Chinese calendar is represented by one of the 12 animals of the Chinese zodiac.

Based on the lunar and solar calendars, the actual date of Chinese New Year varies, but always falls between late January and mid February. This year it falls on the 23rd January. This is the first of 15 days of celebration and the start of the Year of the Dragon.

A baby boom for Chinese people is expected

Like most Chinese around the world, they believe that this is auspicious. The dragon, the only mythical creature among the 12 animals of the Chinese zodiac, is regarded as a symbol of might and intelligence. In ancient China, the dragon was associated with the emperor. Boys born in the year of the dragon, especially, are said to be destined to be successful and wealthy.

According to official data, in previous dragon years, China, Hong Kong and Taiwan have experienced baby booms. In 2000, Hong Kong saw a more than 5% rise in the number of births.

Water has a calming effect on the Dragon’s fearless temperament. Water allows the Dragon to re-direct its enthusiasm, and makes him more perceptive of others. These Dragons are better equipped to take a step back to re-evaluate a situation because they understand the art of patience and do not desire the spotlight like other Dragons. Therefore, they make smart decisions and are able to see eye-to-eye with other people. However, their actions can go wrong if they do not research or if they do not finish one project before starting another.

The Dragon and Love

Dragons are passionate. They fall in love quickly – and out of love just as quickly. Their charisma and charm is an immense draw to people of the opposite sex whose attention and admiration they crave. Though they have a tendency to treat love like a game, they can settle down when they meet the right partner, someone who’s strong enough not to be bowled over by the Dragon’s flamboyant, independent and stubborn personality.

People love Dragons so much because they are generous, charismatic, irresistible, and so brave that standing beside them banishes fear. They generate excitement and turn heads anywhere they go. They are free-spirited and impulsive and can help others achieve their dreams. Others love to be around Dragons because they have a way of making people feel better. Dragons are quick to fall in love, but do not surrender their independence easily leaving most of them to live life by themselves. Yet, a smart, witty, and funny companion may intrigue the Dragon long enough to make him want to get married. And once the Dragon becomes committed, he is unlikely to ever leave.

The Dragon’s ideal partners are the Rat, the Monkey, and the Rooster: The Rat is practical, observant and resourceful, able to help the Dragon when extravagant promises have backed the Dragon into a corner. The Monkey is just as popular as the Dragon, curious, intellectual and fun-loving, one of the few personalities the Dragon doesn’t mind sharing the spotlight with. The Rooster can give the Dragon a run for the money on the fashion-forward front; attractive, well-groomed, fiercely loyal and committed to honesty, the Rooster serves as the Dragon’s reality check, keeping the Dragon from making promises that he or she can’t keep.

The Dragon and Wealth

Dragon years are lucky for anyone thinking of starting a business or initiating a new project of any sort because money is easier to come by for everyone, whether it’s earned, borrowed or received as a gift. Consequently we can expect the economic downturn to ease up a bit in the coming year. Dragons do well in professions that give them the ability to function somewhat autonomously. They make excellent sales people, publicists, political campaigners, lawyers, real estate brokers, actors and politicians.

Select Personal Introductions, a local Northwest dating agency, believe that there is someone out there for everyone and it is a simple case of marrying up both personality and chemistry, which is why it incorporates a unique personality assessment as part of its matching process, thereby identifying individual strengths, weaknesses, characteristics and shared goals, helping to balance out a couples life path together.

Jessica, a relationship consultant, at Select Personal Introductions said, “Single people want to find true happiness with the love and nurture of a long lasting and fulfilling relationship with the strongest anticipation of all, a baby. In fact, the lure of the dragon is so appealing that single people from other cultures have tried to get a head start by joining dating agencies at the back end of 2011 to meet their prospective partner.”

The Association of British Introduction Agencies is a dating agency association which is a non-profit making Trade body. Set up at the instigation of the government in 1981. Introduction, Dating and Matchmaking agencies apply to become members of the ABIA and adhere to a strict Code of Practice.

This website uses cookies to improve your experience while you navigate through the website. Out of these, the cookies that are categorized as necessary are stored on your browser as they are essential for the working of basic functionalities of the website. We also use third-party cookies that help us analyze and understand how you use this website. These cookies will be stored in your browser only with your consent. You also have the option to opt-out of these cookies. But opting out of some of these cookies may affect your browsing experience.
Necessary Always Enabled

Any cookies that may not be particularly necessary for the website to function and is used specifically to collect user personal data via analytics, ads, other embedded contents are termed as non-necessary cookies. It is mandatory to procure user consent prior to running these cookies on your website.